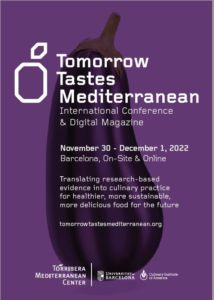 Moving from research to action. That is the main objective of Tomorrow Tastes Mediterranean, the international congress of the Torribera Mediterranean Center (TMC) that seeks to raise awareness among large food service operators that the Mediterranean Diet is one of the main paths to sustainability.

After a second edition marked by the pandemic, the congress returns in its face-to-face format. From November 30 to December 1, the historic building of the University of Barcelona (UB) will host a series of lectures, talks and round tables that will revolve around the theme of the current edition: “Biodiversity, Health and Mediterranean Diet: From Land and Sea to Professional Cuisine”. To this end, a two-day program has been designed with a dozen events and nearly 50 national and international speakers.

According to Adelaida Ferrer, Co-Executive Director of TMC, the presentations aim to “help restaurants, the food service industry and affiliated sectors to better understand and transfer the healthy, sustainable and cultural principles of the Mediterranean Diet to menus and products suited to the demands of 21st century consumers”.

The intention of Tomorrow Tastes Mediterranean is to leave a footprint that goes beyond its celebration and lasts over time. For this reason, an essential part of the congress is the preparation of a digital magazine that collects the conclusions and reflections of the speakers, thus leaving a written record of the next steps to be taken on the road to sustainability.

An international congress for a universal diet

The Mediterranean Diet is one of the most internationally recognized diets. Its benefits for our physical and mental health have been demonstrated for decades by researchers from all over the world, from Harvard to the University of Barcelona. On this basis, the congress will address the challenge of biodiversity, sustainability and other critical issues such as the climate crisis and food innovation.

According to Santiago Mas de Xaxàs Faus, Co-Executive Director of TMC, “the different national and international voices that will participate in the presentations and debate on these and other topics will allow us to rethink the concrete changes that each link in the food system has to make to create a complete cycle of sustainability and empower all stakeholders in their efforts to care for the planet.”

On the other hand, representatives of large companies such as Michiel Bakker, Global Vice President of Workplace Services at Google; Etienne Dufrenois, Director of Corporate Responsibility at Sodexo Europe; and members of institutions or gastronomic operators such as the Barcelona City Council, Barcelona Culinary Hub, Culinary Institute of America or Interprofesional Aceite Oliva Español, among many others, will participate in the congress.

All speakers will participate in round tables and talks where they will exchange views and opinions, generating debates where all sectors can learn from each other, with space for questions that will help enrich the content of the congress.

The Tomorrow Tastes Mediterranean program reflects a wide range of perspectives, from science and culture to industry, taking speakers and attendees out of the usual comfort zone and planting the seeds for more effective communication across sectors regarding the benefits of the Mediterranean diet and the Mediterranean lifestyle.

The full program of the congress is available on its website.

Tomorrow Tastes Mediterranean is a conference created by Torribera Mediterranean Center (TMC), the joint project between the University of Barcelona and the Culinary Institute of America (CIA) with which both institutions seek to promote the Mediterranean diet as a path to sustainability for the food industry.

The conference and the digital magazine are just two of the TMC’s initiatives that best exemplify the imperative to accelerate the transfer from research to practice, from next-generation business strategies to changes in consumer aspirations and behaviors, always within the framework of the UN Sustainable Development Goals, the EU’s European Green Deal (with its Farm to Table Strategy) and the Menus of Change Principles of Healthy and Sustainable Menus of Change designed by the CIA and Harvard.